Established in 1985, the centre gave hope to victims of vicious uprisings in the northern part of the country and other people still struggling to find lasting peace having lost homes and properties during the Nigerian Civil War; to husbands and wives who were forcefully separated by the war; to people who were entangled in patricidal squabbles; people who were struggling to survive and to be reintegrated into the society. The centre rapidly developed into a place of solace for people yearning for total peace of mind.

As Father Edeh puts it, “peace is not just absence of war, rather real peace lasts in the presence of the factors and forces that eliminate and prevent conflicts, minimize tensions”. Father Edeh first took care of the physical well-being of these troubled and forsaken people. He personally cooked for and fed them, provided shelter and clothing for them and above all prayed with and for them. This is in line with his principle of practical and effective charity.

Father Edeh in his African philosophy, articulated a practical way of re-orientating the minds of people without hope. It is his conviction that peace can be attained through, first of all, understanding and accepting the dignity of man, which is exemplified by his actions of goodness. Father Edeh concretized this goodness which gave the hopeless the confidence that any conflict, be it intrapersonal or interpersonal, that is, within one’s self or between one person and another, can be resolved and dissolved peacefully. 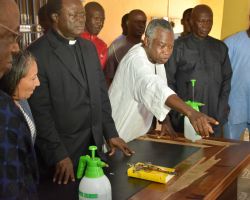 Fr. Edeh at speaking at a conflict resolution meeting 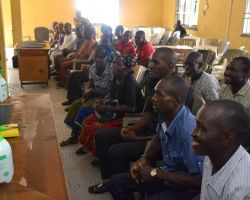 Cross section of pilgrims at the Centre for Peace, Justice and Reconciliation 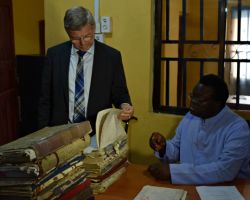 Kjell Bondevik going through the archived log of the peace 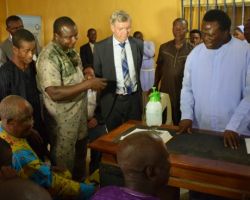